Why I started my own Charity 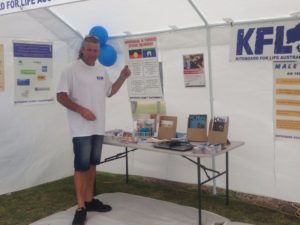 I thought I should probably explain to you all why I've created a non-profit organisation. My life in many instances has been supported by my family especially both my parents. I was asked a while ago by someone "so how long have you suffered from depression."

I thought what a good question because without thinking I couldn't answer. I spent that evening going back in time to try to work out what triggered the way I've felt for so long.
I realised it started way back at the age of 12 when I lost a good friend of the same age to suicide, someone who I grew up with, someone I laughed with, fished with, rode bmx with, went to school with and was a kid with. I had never knew what death was all about or suicide for that matter.

My life was turned upside down and I cried for days. This changed me forever. A couple of years later my parents decided to separate and all this loss came flooding back. Once again for a child my life had been turned upside down. Soon after the separation my dad moved to Queensland which at the time devastated me, once again I suffered loss , my dad!!!

I did what many teenagers did, I rebelled a bit but never ended up in too much trouble. Down the track I ended up with my dream job of which i spent most of my time doing fish surveys in an around the Murray River. I spent a year doing this in which time I met the most amazing people and was able to align myself with my love for the outdoors. A year in and the project finished without funding to continue my role, I was back to the feelings of loss and depression.

I came home to the peninsula to a life of working in the building trade. I was married young and had two beautiful kids, a girl and a boy. My marriage lasted 10 years and ended which was a huge upheaval again which just brought it all back again. I felt like a failure and turned to alcohol.

I managed to keep alcohol issues at bay most times but it did impact some decision making during my adult years. I met another partner to whom I was engaged to which lasted 7 years and failed. During this time she gave birth to a beautiful baby boy. It turns out that this little boy was the turning point in my life. Three weeks before his birth my father passed away which was a insurmountable loss for me and along with my recent separation sent me to a very dark and lonely place, loss just seemed to follow.
I had a very successful business for a long time which I just watched slip away, I couldn't alter my thoughts to change the situation.

During this time I was depressed to the point of suicide. I was living in a factory at this time and decided I would end my life. I was drunk and opened my gun cabinet and removed a double barrel shotgun. I sat down in a chair and loaded the shells into the gun.
I had the gun resting on my leg when my ex- partner and my young son walked in to the factory.

They had not been invited and I'm still not sure why they were there that day. This changed my life forever, if my son wasn't walking through the door I may not be here today. It was my wake up call to start to change my life, but how? I had two great things in my life, my three children and a passion for all things kiteboarding.

I found kiteboarding in 2000 and have been involved with it ever since. It along with my kids has been my saviour. Kiteboarding for me has always been about freedom, satisfaction and a release from my negative thoughts of depression. The day's proceeding the incident with the shotgun I realised it was up to me to turn my life around for the better.

I needed something that would raise my passion for life again. What was I passionate about? A week later I found that I was had a passion for long distance kiteboarding.
I went from Mt Martha to St Kilda. The buzz I felt from this has inspired me to take things to a higher level. I decided that I want to kite around the biggest Island in the world, (Australia).

I still suffer from the affects of depression and take medication but I feel as though I'm one of the lucky ones who survived and now is my chance to help others through their depression and thoughts of suicide. This idea is not new and I've been passionately working on this for two and half years.

I'm supported by my family, friends and a cool bunch of helpers who I call my little army.
These people believe in KFLA and my attempt to circumnavigate Australia. I personally want be able to raise awareness and money to help reduce the affects or depression and suicide amongst the entire community.

I feel quite sure that I will be able to achieve all the things that KFLA has set out to do.

View all posts by: nshepheard